The Iliad of Homer

In our meetings we read the Penguin edition of The Iliad (Fagles’ translation).

To get started in your study of The Iliad:

Names can be confusing! The following are all various names for the Greeks:  Achaeans = Danaans = Argives = Hellenes = Greeks!  The city of Troy is also called Ilium.  Paris is sometimes Alexander–he’s the son of Priam who seduced Helen of Sparta, thereby starting the war. Also, there’s a certain suffix (-ides) that combines with the name of the father that means “son of”–many of the heroes are known by this alternate name. The sons of Atreus were Agamemnon and Menelaus, who were also known as the Atridae (singular Atrides).  Diomedes is sometimes called Tydides (son of Tydeus).

Keep Track of the Characters

I take a piece of card stock and cut a long strip to use as a wide bookmark, on which I make notes about main characters.  Don’t try to do this all at once, but, as you read, collect an understanding of the characters by listing phrases about them, or things that happened to them (add others as you desire):

Below Hector is admonishing Paris for leaving the battle for the bedroom.

Create another page with the following:

ESPECIALLY NICE!! This a website with a beautiful, interactive map of ancient Greece: Scroll down to the list of places. Notice the way you can hover over the name of a city or island and it will show you exactly where it is on the map. http://www.sigmabooks.gr/maps_en_enGreece.html

This webpage compiled by a professor at University of South Florida, summarizes each book. Here is a webpage that describes the characters in The Iliad– http://shell.cas.usf.edu/~demilio/2211unit1/names.htm

And, for some Historical Background to help organize your progress through the Great Books: 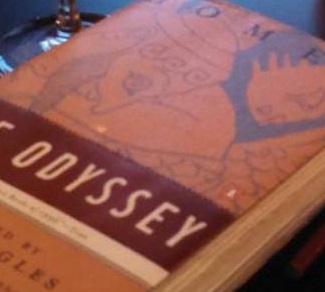 The Odyssey by Homer

There are so many great helps for reading The Odyssey:

One response to “The Iliad of Homer”

This site uses Akismet to reduce spam. Learn how your comment data is processed.